The ethnographic museum of Assam Institute of Research for Tribals & Scheduled Castes was set up along with the other wings of the institution in the year 1977. The infant museum was converted to a full fledged museum after a good collection of museum artifacts from the entire length and breadth of Assam, the cultural cauldron of North East India. At present the ethnographic museum displays a good number of exhibits belonging to the indigenous tribes of North-East India, particularly Assam.

The material culture of tribes of Assam such as Tiwas, Karbis, Rengmas, Hmars, Dimasa Kacharis, Rabhas, Bodos, Misings, Sonowal Kacharis, Tamangs and some other tribes are housed in the show cases of the gallery in a tribe-wise manner. Moreover, a section showcasing rare and exquisite ethnic jewellery of the tribes of Assam is maintained in a separate room for exhibiting the same.

This Directorate has also endeavoured to portray the life and culture of some indigenous tribes of Assam in the museum gallery. Picturesque landscape and sculptural figures of the Karbi tribe, the Bodos, Dimasa Kachari, Karbi, Tiwa and the Mising tribe are represented in the dioramas.

There are altogether more than seven hundred (700) artifacts in the ethnographic museum in the Directorate of Assam Institute of Research for Tribals & Scheduled Castes. The Ethnographic museum is now focusing in modernizing the museum through digitization and thematic display. The Institution has published a number of brochures, pamphlets and a catalogue. There is a plan to bring out other published works on its exhibits.

The Ethnographic Museum during the year 2014-15, has acquired the following artefacts-

The Institution of Museum can be considered as Cultural Hub or Culture Interpretation Centre of a country or region. Museums are always associated with tangible aspects of culture. But in 2007, ICOM in its 21st General Conference in Vienna, Austria, voiced that Museums should involve both tangible and intangible cultural heritage. Some scholars advocate that tangible culture has greater advantage over intangible counterparts due to the care it receives over long duration.

Culture is a way of life of people. Culture incorporates a society’s arts, belief, customs, language, technology, institutions and values. Culture produces similar behavior and thoughts among the people of a particular society in a particular surrounding. Cultural heritage is the legacy of material culture and intangible attributes of a society that are inherited from the past. Material culture is an intrinsic part of the society of human history because they provide a concrete basis for ideas to construct and reconstruct history. Thus culture can safely be concluded as a total range of activities and ideas of a society with shared tradition, which are handed down from one generation to the other.

Museums are not just about artifacts collected from diverse communities; they are manifestation of culture that produces them. Well-articulated documentation based on intensive research is the backbone of ethnographic museums, as it ensures a continued relevance in research and for the communities concerned. With the growing years, considerable degree of attention has been directed towards “Cultural Maintenance”. Earlier Ethnographic Museums focused on presentation of culture only. Now various ethnic communities are involved deeply in ethnographic collections of museums to elaborate, reconstitute and reconstruct their lost linkages. Genealogies, photographs, traditional know-how, like other artifacts, pose a quintessential material that can be harnessed for community identity and history.

John Stauton in his ‘Ethnographic Museum: Collection from the past into the future’, voices that the collection of artifacts have their own heritage, a vibrancy that derives from past accounts of manufacture, usage and perhaps abandonment, to new interpretations. It is said that museums have to be able to accommodate and facilitate these changing narration, as much as they must reflect on these insights as communicating the stories within which they are embedded. Stauton refers that these histories come from visitors, scholars and indeed curators, besides the community of origin.

Ethnographic Museums take into account the whole plethora of information, knowledge that is directed. The artifacts in museums become the media of communication that provides insight in different ways. It is well reflected that an artifact in the museum is the result of a human encounter between the manufacturer or user of the artifact and the Curator.

Showcasing culture and heritage is one of the main objectives of Museums, besides presentation. Heritage encompasses both physical and cultural environment. It preserves and manifests the long processes of historic development. Ethnographic collection in museums reminds the history and culture of the people with reference to the framework of time. When the artifacts are showcased in galleries, the simplicity of an object is lost as soon as it is labeled and digitized. When a visitor sets his or her eyes in an exhibit, a kind of learning environment is created, which enables her or him to react with the object. The consequence of such a series of reactions produces a situation, when the onlooker or scholar can fill up the lost or missing links in culture. Showcasing culture in museums in a proper and error- free way should be emphasized to meet the educational role of museums. Because, no teaching – learning material accompanies the exhibits, nor there is any compulsory curriculum. The order of display should motivate the learner, as education in museums is a spontaneous process. Museums in its educational role, stimulates the brain as well as it provides a joyful experience.

The Ethnographic Museum of Assam Insti tute of Research for Tribals and Scheduled Castes displays a good number of exhibits belonging to the indigenous tribes of North east India, particularly, Assam. The tribes of Assam like the Mising, Bodo, Rabha, Karbi, Dimasa, Hajongs, Tiwa, Sonwal Kachari, Hmar, Kuki, Garo, Rengma Naga, Zemi Naga etc. have their own distinct culture which encompasses both tangible as well as intangible traits. The material culture like musical instruments, fishing and hunting tools, traditional attire, utilitarian objects, jewellery etc. of these tribes finds place in this Ethnographic Museum. The terrain of North-East India has a wide variety of flora and fauna. Bamboo and cane are found abundantly in the vegetation of this region. Most of the artifacts of these communities are made of bamboo and cane. Ornament caskets, storing baskets, carrying baskets etc. are housed in showcases for presentation and display. Spouted wooden bowls, wooden ladle, plunged baskets with different shapes and sizes are on display. Hand woven basketry and wrapped basketry built on coiled foundation are housed. Craftsmanship is expressed in exquisite bamboo and cane handicrafts based on coiled wicks, matting and twined works.

Again the bold and beautiful geometrical pattern, motifs, in the textile in combination with intricate designs reflects their artistic pursuits and their traditional bonding. Most of the designs are depicted from their ecological setup. The Mirizim of the Miris is a unique collection. Now-a-days, the weaving of this rug is on decline.

Some of the Traditional Textiles

Musical instruments like the drums of Garo, Bodo, Tiwa, Karbi, Dimasa etc. in showcases of the museum, highlights their love for dance and music. The unique string instruments of the Bodo, Dimasa and Karbi also finds place in display of the Ethnographic Museum. Flutes of different material and shapes are also exhibited.

The exquisite traditional jewellery of the Northeastern tribes is housed in a separate section.

colourful beads and coins have always been favourite with the hill tribes. They also wear exquisite designs of silver and other metallic jewellery, sometimes in combination with wild beads, glass, amber and feather. Necklaces made of coral, cornelian beads, amber, conch shells, local rubies, tiger teeth, rudraksh are also not uncommon. Different types of armlet and anklet made of ivory, silver, alloy, cane etc. finds place in the shelves of the AIRT &SC’s Ethnographic Museum.

In an endeavor to portray the life and culture of the indigenous tribes of Assam, the Ethnographic Museum has in its possession, five dioramas in the gallery. The picturesque landscapes, hutments and miniature sculptural figures of the Karbi, Bodo, Dimasa, hill Tiwa and Mising tribes reflect a vivid picture of their life style, ecology and tradition.

With the advent of modernization many ethnic groups are migrating to newer avenues, outside their native place and as a result they are not being able to follow or keep their heritage intact. Museums have been always trying to bridge the gap through cultural interpretation of the artifacts, showcased in the museums with the respective community support. The need of the hour is to focus on proper documentation and interpretation of the tangible and intangible heritages of the different communities of the region. 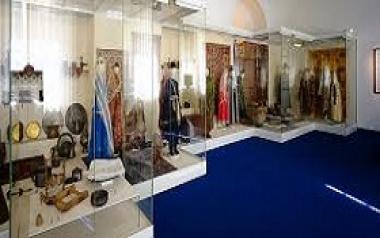